Why Is My Dog Whining?

Wondering why your dog is whining? Read on as Finn looks at the potential causes of this behavior and tips on what the next step might be. 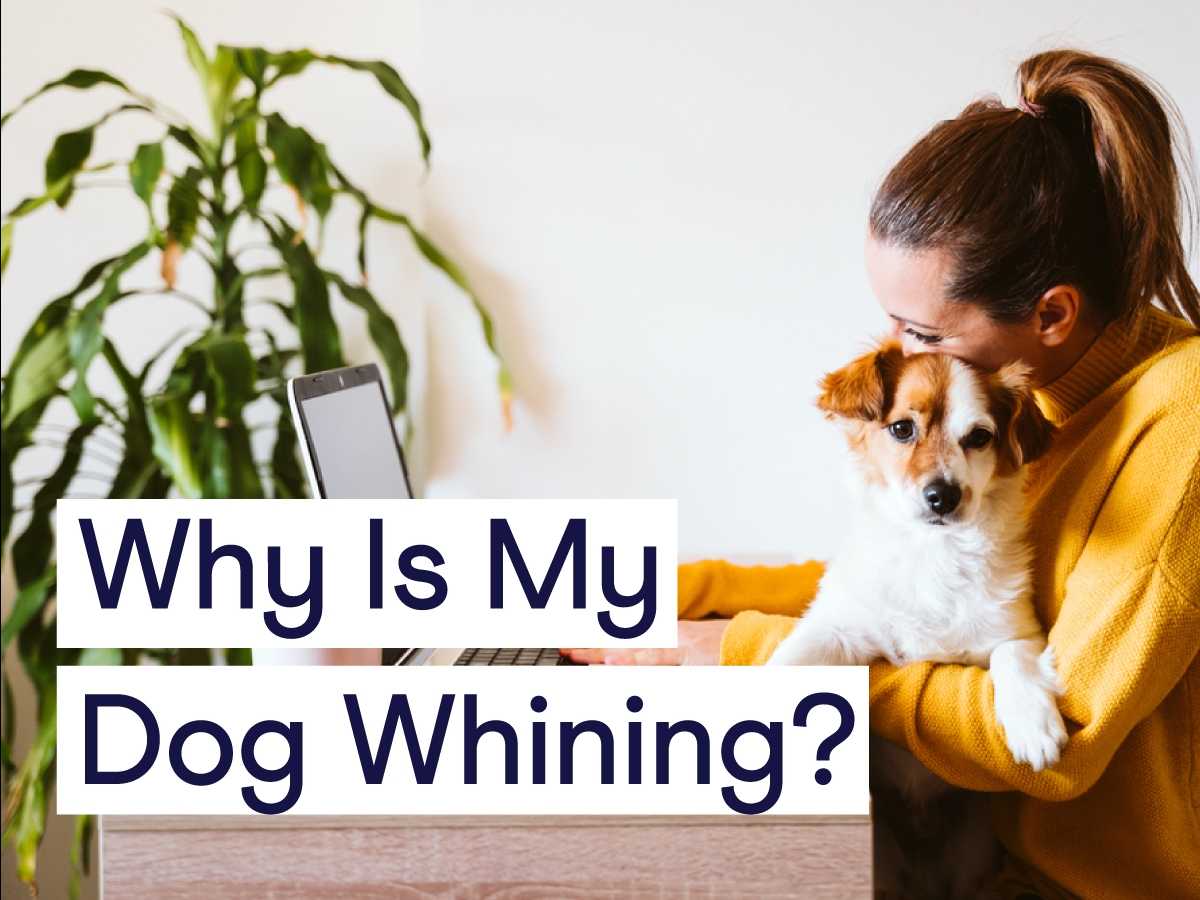 Human whining and dog whining are not necessarily the same, and this is one example of the language barrier at hand. Does each behavior mean the same thing? What is your dog trying to tell you when they are whining at you?

Here at Finn, we want to help you have better communication and a deeper understanding of your canine BFF, so let’s take a closer look at this behavior and what it can mean

As long as dogs have been around, humans have tried to understand why they do the things they do. The science behind canine behavior has continued to evolve and change since its inception.

For instance, we previously thought of dogs as the pack-loving alpha descendants of wolves, but we understand them differently now.

When interpreting dogs, instead of approaching behavior using a dominance-based mindset, it’s essential to look at them as individuals. While all dogs have similar communication tactics, each has personal motivations behind using them.

What Exactly Is Dog Whining?

Dogs communicate with the world around them, just like we do. However, although they use many of the same verbal and nonverbal techniques that we do, the way that they do that varies.

Whining is one of many different forms of vocal communication that your dog can use to get their point across. 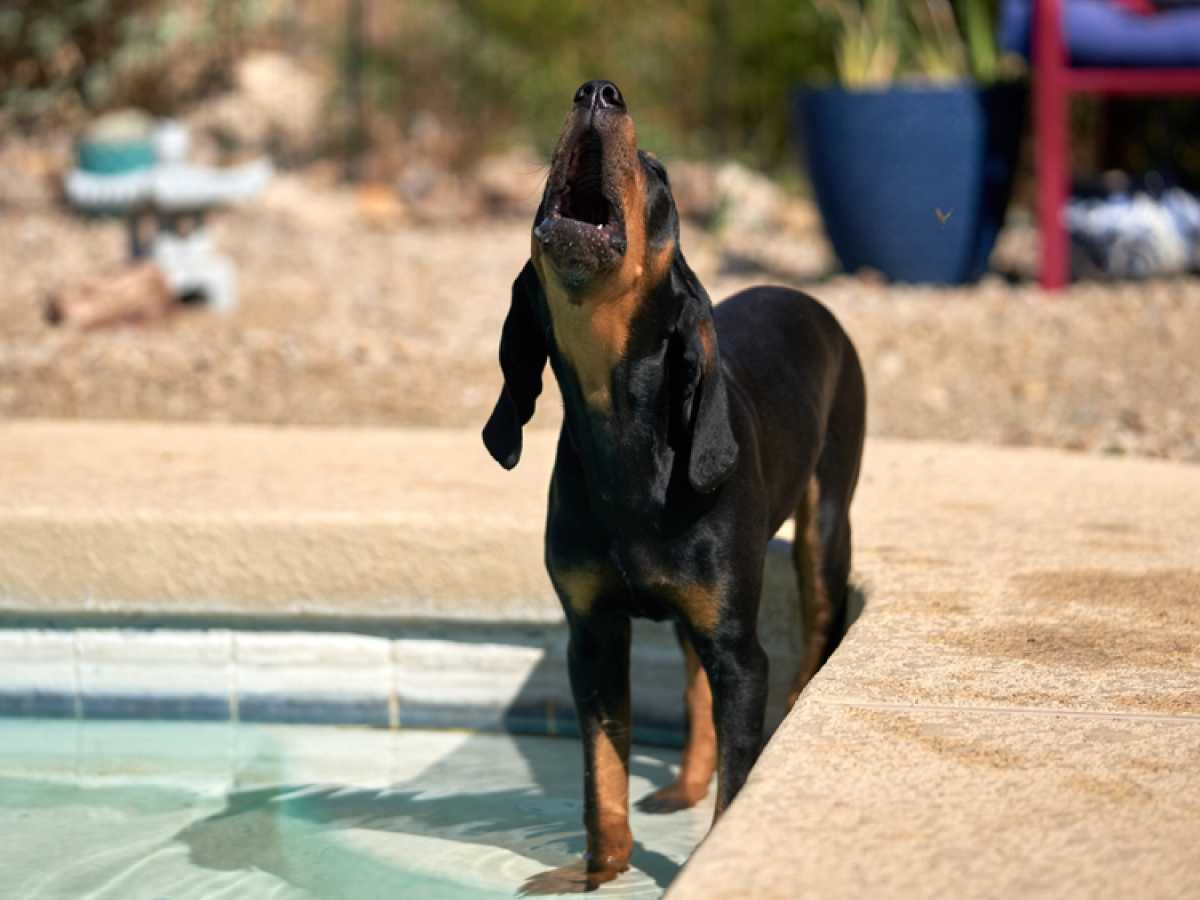 Dogs start whining as puppies to help tell their caretakers that they need attention or resources like food or water. As they grow, they learn how to use that type of vocalization to talk to the people and animals around them, and the meaning changes and evolves.

Is Dog Whining the Same as Human Crying?

We often refer to our dogs’ whining as crying, but does it serve the same purpose?

When we’re sad, we often cry. If the situation is intense, we may even sob or wail to get the emotion out and cope with what’s going on. Crying is a very normal part of the human experience, so it’s natural to want to see that behavior in the world around us.

Unfortunately, dogs don’t make tears for the same reasons. While their eyes do water, it is a physical reaction to foreign bodies or infections, not for emotional reasons. Because of that, we can’t rely on tears as a way to figure out what our dogs are thinking, and we have to look at their other behaviors to clue us in.

If you see discharge from your dog’s eyes, especially if it is anything other than clear, you should schedule an appointment for your dog with their veterinarian.

What Does It Mean When a Dog Whines?

One of the tricky parts about interpreting whining in dogs is that there isn’t a single, unambiguous meaning behind it. Whining can mean many different things, so you have to rely more on context to help you understand what they may be trying to tell you.

Here are a few of the more common interpretations for whining and how you can narrow down what they might need from you. 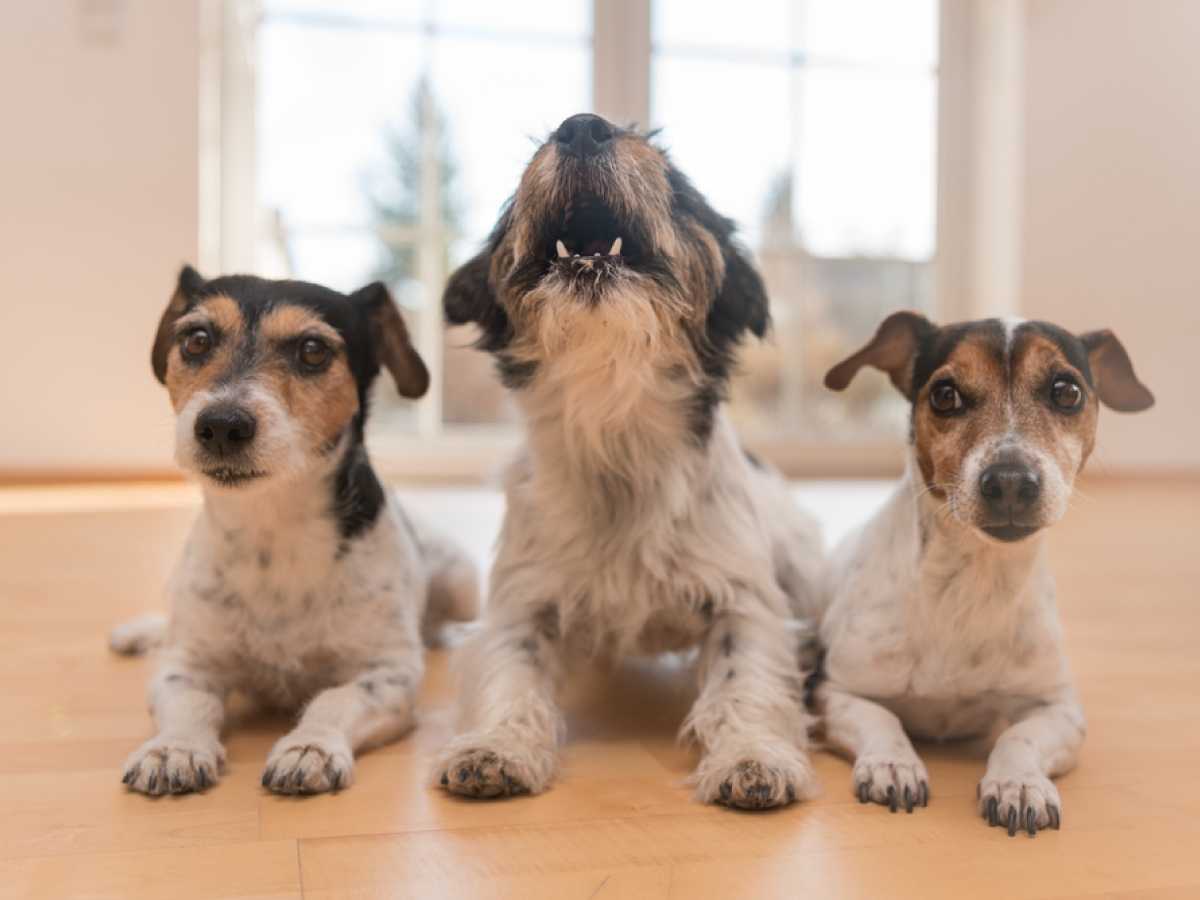 Although we now know that dogs don’t subscribe to the same alpha-dog mentality as we once thought, they practice appeasement behaviors in certain situations. It can be helpful to think of them as calming signals, which are vocalizations and gestures designed to calm a situation down.

Often, you’ll see these types of behaviors when your dog is feeling stressed out, scared, or uncomfortable.

In addition to your dog whining, you may see them tucking their tail between their legs, averting their eyes, lowering their head, rolling onto their back, or yawning. Dogs who show appeasement behaviors are trying to tell you that they see a threat around them that they are trying to de-escalate. It’s also a sign that they may suffer from low self-confidence.

While there is some crossover between appeasement behaviors and anxiety, it deserves its own category and discussion. When faced with situations that make them anxious, many dogs may whine unconsciously. In other cases, your dog may use their vocalizations as a plea for you to help get them away from the stimuli that are triggering their anxiety.

Anxiety is also an emotion that can lead to aggression, so it’s worth doing what you can to calm your pup down and make them comfortable.

It’s worth noting that there is a subcategory of anxiety known as separation anxiety. If your dog suffers from separation anxiety, you’ll likely notice that they only whine when you are getting ready to leave the house. Whining is often paired with relentlessly stalking you from room to room.

Although you may think it’s cute that your dog is so attached, it’s crucial to stop this behavior and help them work through it to achieve more independence. When anxiety becomes a chronic issue, it can lead to physical and mental health issues.

Have you ever come home, and your dog greeted you at the door, all tail wags and excitement? 99% of the time, your dog is also doing some sort of vocalization as they prance around you. 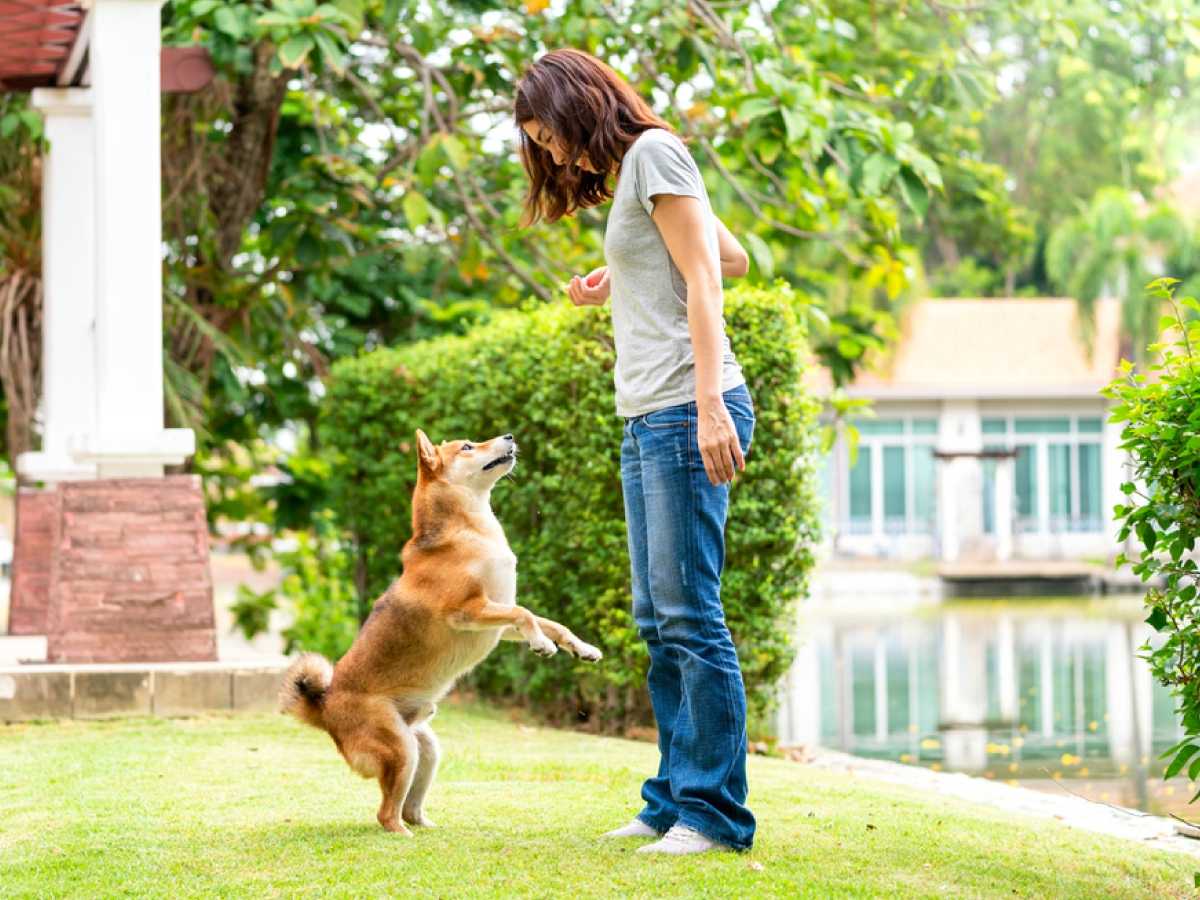 When it occurs as part of their greeting behavior, dog whining is motivated by their happiness to see you. It’s a way of telling you how much they have missed you, and we believe it is one of the best parts of dog ownership.

There can be a downside to this level of excitement, though. Some dogs will also pee when they greet you, an unconscious response known as excitement urination.

Some dogs whine in an attempt to get what they want. Not everything your dog is seeking is a bad thing, though. Sometimes they whine to get their basic needs met, like going outside to use the bathroom or getting their water bowls filled. If you pay close enough attention, your dog will likely help you by looking at what they want.

Although they don’t quite reason the way we can, whining can be similar to emotional manipulation. They have learned that whining gets you to do what they want, so they continue to use it.

In a more innocent light, it can also just be a vocal expression of frustration, especially if they’ve seen you do the same thing.

One final consideration behind your dog whining is physical illness or pain. Although dogs tend not to whine when suffering from chronic pain, acute pain or illness can trigger vocalization. This type of whining is usually much shorter, sharper, and sounds like crying.

What To Do If Your Dog Is Whining

For many people, whining is like nails on a chalkboard. When your dog is whining, it may be tempting just to do whatever you think they want to get them to stop. However, it ends up reinforcing whatever behavior is triggering it.

The next time it happens, take a deep breath before reacting. Then, try to take stock of everything that’s happening around them at that moment.

This method can help you figure out the context behind your dog whining. Are you getting ready to leave the house? Is there someone new in your space that your dog seems unsure about? These clues can help you identify the problem so that you can start working toward fixing it.

Each trigger for whining requires a slightly different approach. Dogs who whine as an appeasement behavior, for instance, will need help developing their confidence level.

The one thing that remains the same for all reasons is that you should never react to your dog whining with anger or aggression. Your dog can’t understand that you are frustrated with their vocalization and will learn to be scared of you.

If you can’t figure out a behavioral trigger, start looking at potential physical causes. Check your dog all over for signs of pain or injury, and watch to see if they are limping when they walk.

You should also look into their diet, as gastrointestinal discomfort can also be a source of whining. Make sure your dog is getting a well-balanced diet, supplement as needed, and don’t forget to introduce and change foods slowly. Even just a single fatty treat (instead of a healthier option like an apple or banana slice) can make their stomachs upset and cause them to whine. You should check their abdomen for signs of bloating — if you see this, contact your veterinarian immediately, especially if they wince when you touch their abdomen.

It may also help to seek the help of a behaviorist if you’re struggling with your dog’s whining. They are trained to help you figure out the root of your pup’s issues and then work with you to find a solution. We recommend working with positive reinforcement-based trainers, who use treats and other rewards to achieve desired behaviors.

If your dog is whining, don’t react out of annoyance or frustration. Although the sound of whining may be irritating, it is just one vocalization in your dog’s limited bag of tools that they can use to communicate with you. Try to listen to what your dog is trying to tell you, as it can help you better meet their needs.

Positive reinforcement training | The Humane Society of the United States 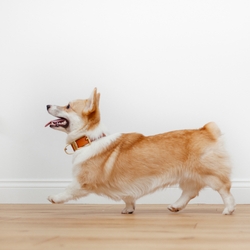 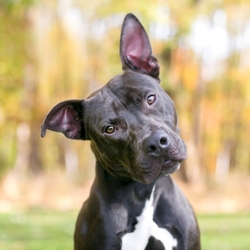 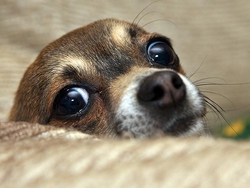 Why Does My Dog Stare At Me?

Thanks, welcome to the pack!